EUR/USD, details of my prediction 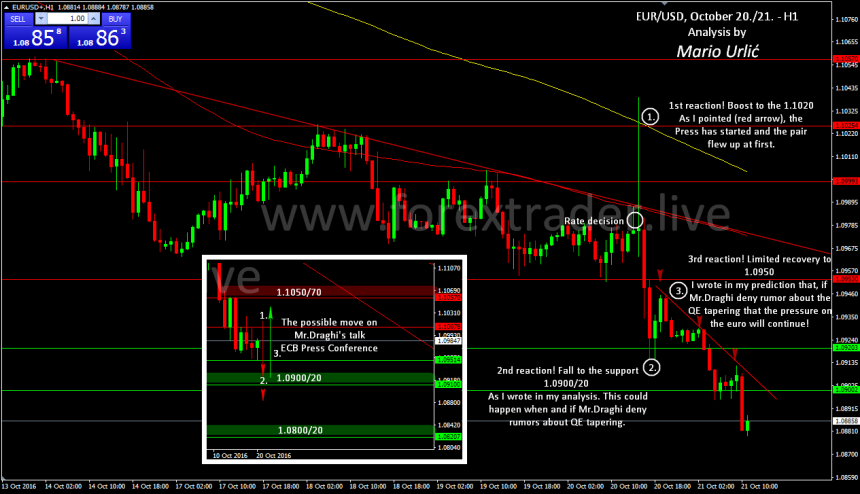 I see that many of you (104 views) have sow my prediction on possible EUR/USD move during the ECB’s press conference, but I hope that you are well-read what I wrote in my analysis, not only look at the picture. Because, everything I wrote was exactly as I predicted. At first, the pair flew up at the resistance level 1.1020, where the sellers have took over and on Mr.Drgahi’s answer about QE tapering, they have pushed the pair strongly down to the support at 1.0920. The buyers have stoped the fall exactly at the support zone, but recovery was limited at 1.0950, where the sellers have took over again, as I said it wil happen if Mr.Draghy deny the rumor about the possibility of QE tapering. And, he said clearly that they have never disquss about that! As I wrote yesterday, if that happen at the press conference, the pressure on the euro will continue furder and the support zone 1.0900/20 will be in danger. It’s broken. Well, as I always wrote, read my analysis carefully because I combine everything when I made a predictions on possible moves. I hope you did. 😉

Btw. As I wrote and pointed yesterday as well, this teritory is where the buyers are placed all the way to 1.0800/20 and the question is from were the pair could bounce, but as I see it, the pair could recover from here in between the 1.0900 and 1.0800. We will see that soon.