Everything I wrote and predicted about Bitcoin

I wrote only two articles about Bitcoin in my web Aureus Invest and have made a several comments in various web sites with my analysis and price predictions. So, let’s see what was it all about and start from the beginning. I would like to have everything here in my main web site Forex Trader, it’s interesting to review it now after one year of the Bitcoin bubble.

My first article about Bitcoin was written on August 15.2017.

I don’t trade Bitcoin, but I follow the news and developments with crypto currencies preaty much. What was interesting for me in about month ago were the headlines of the possible Bitcoin and other crypto currencies crash in the coming period. Everybody was writing about the same thing, the Bitcoin ‘will crash’ soon. Of course, such a headlines, which were on the top of the news in June/July forced most of the traders to sell the crypto currencies, which caused the additional fall of the Bitcoin from $2,400 to aprox $1,800. Sure, ‘the big boys’ were ready there to fill up their bags and they push the same back and way above the previous high ($3,000) to aprox $4,000. Such a developments are usualy with purpose to make a bigger story from it, so watch it furder. This could be just a beginning.

I always said, when all media and most of the analysts starts to write about something spectacular, it will happen opposite of that. On March 04. 2015 I wrote a short article about that, and based on similar headlines and predictions I have found and predict the EUR/USD technical bottom and reversal point at 1.0500 on March 11. 2015. Always think of that when everyone start to talk about it, maybe it’s time to consider the possibility of the opposite development.

My second article about Bitcoin was written on December 08. 2017

If your neighbor did not buy bitcoin, that’s must be strange, right!? There is a real Bitcoin mania out there in the moment and it looks like there is no end of Bitcoin price growth. I have so many questions lately like, why the Bitcoin price is going up so fast almost every day? Should I buy a Bitcoin, is it too late? Is it true that the Bitcoin will reach a $100,000? Etc…

Well, from my perspective, I have several meaningful answers on those questions. At first, the most important one. The price is going up sharply because everyone talks about it, everyone writes about it and because of that everyone want’s to buy it! That’s the main reason why the price is going up sharply. I mean, no matter what the ‘experts’ says, in my point of view, the price is not going up because there is a limited supply of bitcoins. There was a limited supply years ago and noone wants to buy it then, right!?

There is only one reason and that’s the great demand at the moment. As before mentioned hysteria, everyone is buying bitcoin because they think the price will go up furder, as each new buyer think that more people will want to buy it and because of that they believe that the bitcoin will go up in price furder more. As I have the info, more than 6,000 new investors are opening their account on the Bitcoin exchanges every day lately, which has an obviuos effect on current price. Is this price of $16,000/$17,000 a bubble? For sure it is, but as every bubble, it could be bigger and that’s why the price could go up more. How much more? Until the bubble bursts. It could be $16,000 or (I doubt) $30,000, maybe $50,000, nobody can predict that. But, in my oppinion, this is the time and level for selling, because correction could be huge when big players start to sell how to take a profit. Why now? As I said, everyone want’s to buy and that will be the opportunity for sellers/big players how to reach a big volume.

No matter what others says, I don’t see any fundamental, or any other background for this latest developments. You simply can’t calculate the value of bitcoin. It’s valuable for sure, but in my view it’s far bellow from this current price of aprox $16,000. Maybe you will say that I am crazy, but if I had to determine ‘the value’ of bitcoin, I would set it somewhere between $500 and $1,000 at most. Btw. there is so many issues what can disrupt the future of the cryptocurrencies and nobody can prevent the possible failure and possible fall to even a zero, what I don’t believe in, but… I mean, nobody can fight against the banks, the real currencies, no matter the possible valuable blockchain technology. It’s simply impossible to go against the giants. But, no matter the current market Bitcoins value and latest growth, that’s still not important for the monetary system and it’s not a threat to them.

So, how the bitcoin will crash eventually? Well, the bitcoin mania will simply flip at the moment. When price start to fall, possibly without any reason, the same people who was buying at the hysteria when price was going up, they will sell, probably at a loss. I mean, someone big will pull the trigger at first. This will make the price go down even more, triggering panic and the negative spiral will begin. The opposite reaction that has led the price to go up, a form of mass hysteria, will also potentiate a massive sell-off and possible crash. We will see from which point something like that will happen!?

It’s basically the same story with stocks without fundamental background, if you ever traded with it. 🙂

Prediction of the furder fall from the exact pointed level

A couple of days after this article Bitcoin started its first decline and as I had a private request for analysis and prediction from to me a very important person, I followed a move furder and made some analysis and predictions for him. Unfortunatelly, he didn’t want to listen my advice to sell everything at $16,000 to $17,000, but this is how everything went for him at the end with my help.

My answer was that the price is forming a so called “falling flag” and pointed at possible furder decline toward $8,000. Go to the original article, please click here »»»

To show you how I sow this possible decline even more clearly, here’s my analysis of the potential H&S pattern from the end of December 2017. just few days before this comment on forexlive.com web. This was much better TA chart, which I made not even professionaly, but again drawn freehand, same as this “falling flag” before. 🙂

That’s how I continued to analyse Bitcoin for my friend furder and made this on January 16/17. 2018 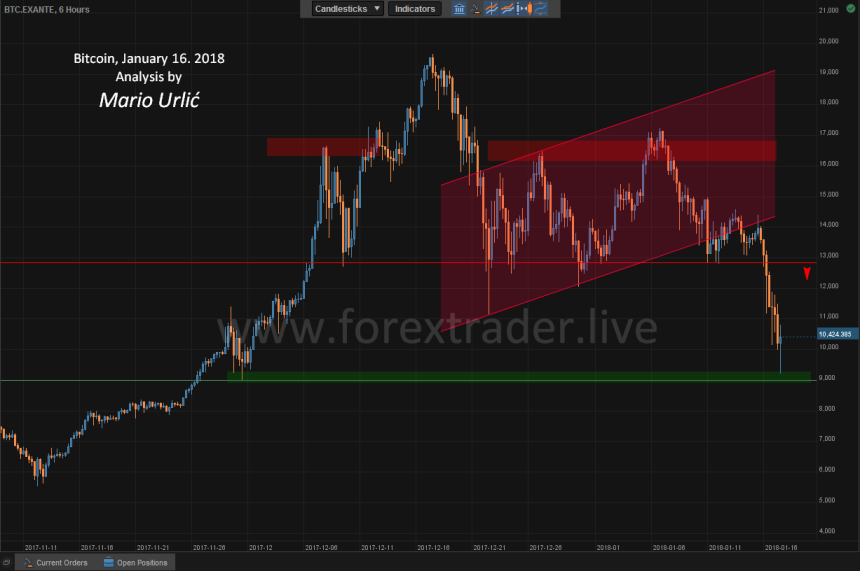 It’s easy to quees, the Bitcoin price moved exactly as I pointed in my analysis. 🙂 The price reached $13,000 quickly on January 20/21. 2018 after which decline continued.

Those analysis I even published at the Croatian financial forum where my nickname is “Smart”. You notice that on this decline I didn’t marked $9,000 as a furder support, cause I sow the lower point of return this time.

Which I found with this falling channel and lower support line at aprox $6,000 on February 06.2018 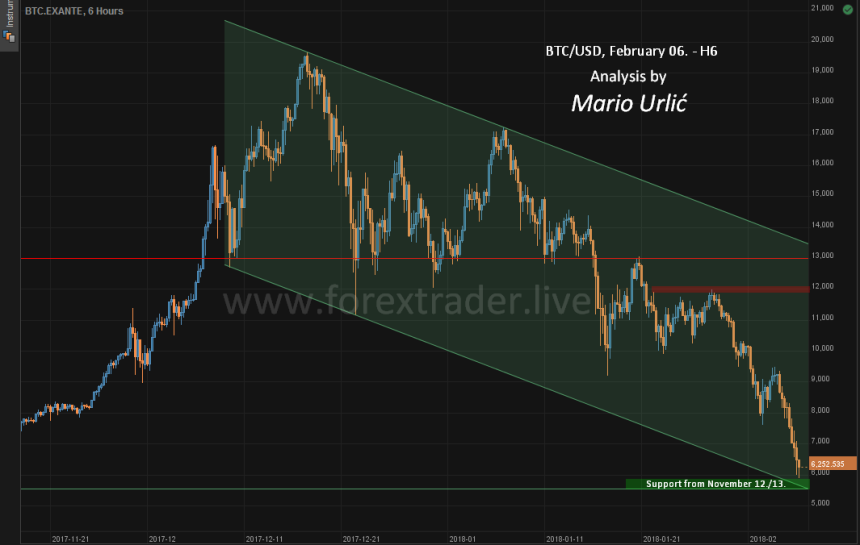 Which exactly hapened as I predicted once again as you can see. The price reached almost $12,000 on February 20. 2018 and to me, that was the crucial level for potential return toward $17,000. I made this for my friend and told him, if this line and level at aprox $12,000 can’t be broken, sell all you have and don’t return in Bitcoin again!

Fortunately, this time he listened to my advice and sold his bitcoins at a price of aprox $11,000. To show him that I am realy serious with this, I even took a large short position at the same level, with target of aprox $9,000. 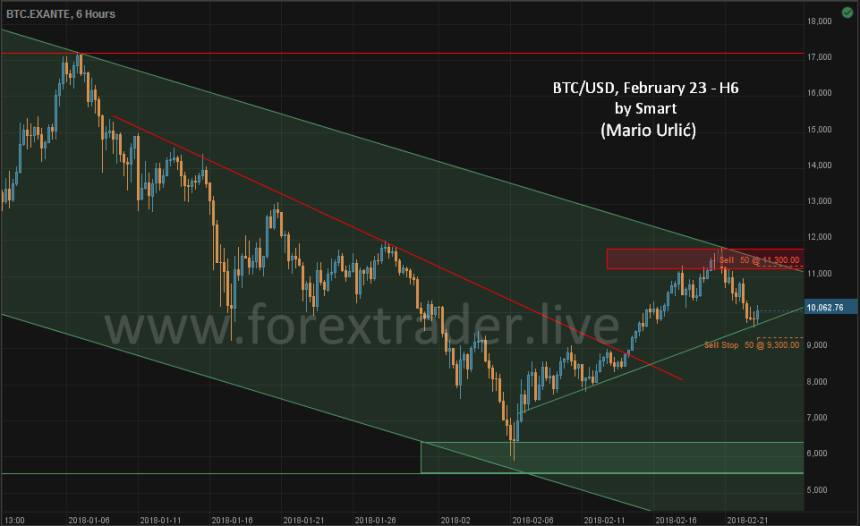 After this, as he sold his Bitcoins I didn’t sow the purpose of the furder analysis, even that I followed the price. As you know, the price held at aprox $8,000 until November 2018 and then crushed toward $3,500.

Now at the end of this article, it’s a good time to remind you of my article “Bitcoin Mania” from December 2017, at the top price of the Bitcoin and to quote the genius Albert Einstein; “The only source of knowledge is experience”

It is and it’s priceless in this job!

We wrote something on theese days